Here is a gallery that will give you a glimpse of the works coming out of the studio. You can discover a little more about their history which animated their creation.

As you are not safe from a crush, the store is there to satisfy a bit of sweet madness, compulsive spending is allowed on this site.

” The Imaginary World of the Sea “

It is essential to cultivate your imaginary garden, to make live a part of our dreams more or less buried in our adult body. The good news is that imagination is free of charge, it is free to sail just as your mind is free to sail wherever it wants.

Imagination is like a magic formula that allows us to escape, to preserve our dear freedom. I remain free while being forced to put on a mask, to come home at 8:00 pm, not to kiss my friends, not to sit on café terraces, not to stroll in a museum, not to… not to…

So, I go for a ride at sea, even if I do not own a sailboat, I hoist the sails to meet unidentified marine animals, I sail on the waves to meet lost cities, just as I can imagine myself enjoying a good wine at the table of a café with my friends. I see fish running, birds swimming, I think of the coming parties to catch up on the postponed evenings.  I have furious desires to continue my journey towards what animates me, towards a world that is softer, sparkling with good humor.

It also means concentrating on the present moment.

David Bowie used to say: “It’s the fact of living that interests me, not the result.”

The fishes fly, the algae swim… It seems to me that everything is going very well.

If I do not recognize the places, the people, the situations, it’s probably because I’m lucky enough to discover them.

The disorder is in the order of things.

It is not her portrait as you have seen it, it is the incarnation of a strong woman.

Frida is a symbol of resilience, of daring.

She was not afraid of her emotions, she fought for her convictions, she lived with her whole being despite her tireless pain.

Frida Kahlo, a revolutionary soul, liked to say that she was born in 1910, the date corresponding to the Mexican revolution, but Frida was already 3 years old. Her official date of birth was July 6, 1907 in Coyocàn. The announcement of this false date of birth reflects the personality of Frida who had a propensity to want to improve her reality, to add colors, to forget her pains, to invent words.

She undoubtedly liked to sweeten her life by appropriating small fictions, by making poetry.

“Can verbs be invented? I want to tell you one: I heaven you, and so my wings stretch out, enormous, to love you without limits.”

Polio invaded her body at the age of 6, leaving her with the after-effects on her right leg, which became lame. On September 15, 1925, she survived a terrible accident, her bus was hit by a tramway. About twenty fractures and her dislocated right foot left her handicapped. She spent months painting from her bed, a remedy for her pain, an escape from her terrible reality. She had to deal all her life with the after-effects of this accident.

Frida’s mother described Diego Riviera and Frida as “the marriage of an elephant and a dove”. They were first married on August 21, 1929, they were divorced and then remarried. This couple lived a harrowing relationship, punctuated by “escapades” and surprises of all kinds. This did not prevent Frida from summarizing her expectations in three main points: “To live with Diego, to keep painting, and to belong to the Communist Party.”

Frida was a passionate, whole woman who used to say: “The only thing I know is that I paint because I have to and I paint everything that goes through my head without any other consideration.” She was ready to face the whirlwinds of life, her view was rather fatalistic although full of hope; “Nothing is absolute. Everything changes, everything moves, everything turns, everything flies and disappears.”

In 1951 Frida can no longer move around without her wheelchair, which does not prevent her from having her first exhibition in Mexico in 1953.  She attended the opening of her exhibition in her bed, which she made carry since she was unable to move around.

“Viva la Vida” is the title of one of her last works paying homage to life, a painting she created eight days before her death. July 13, 1954 was the day of her “last reverence”.

Frida said, “I hope the exit is joyful and I hope I never come back”. 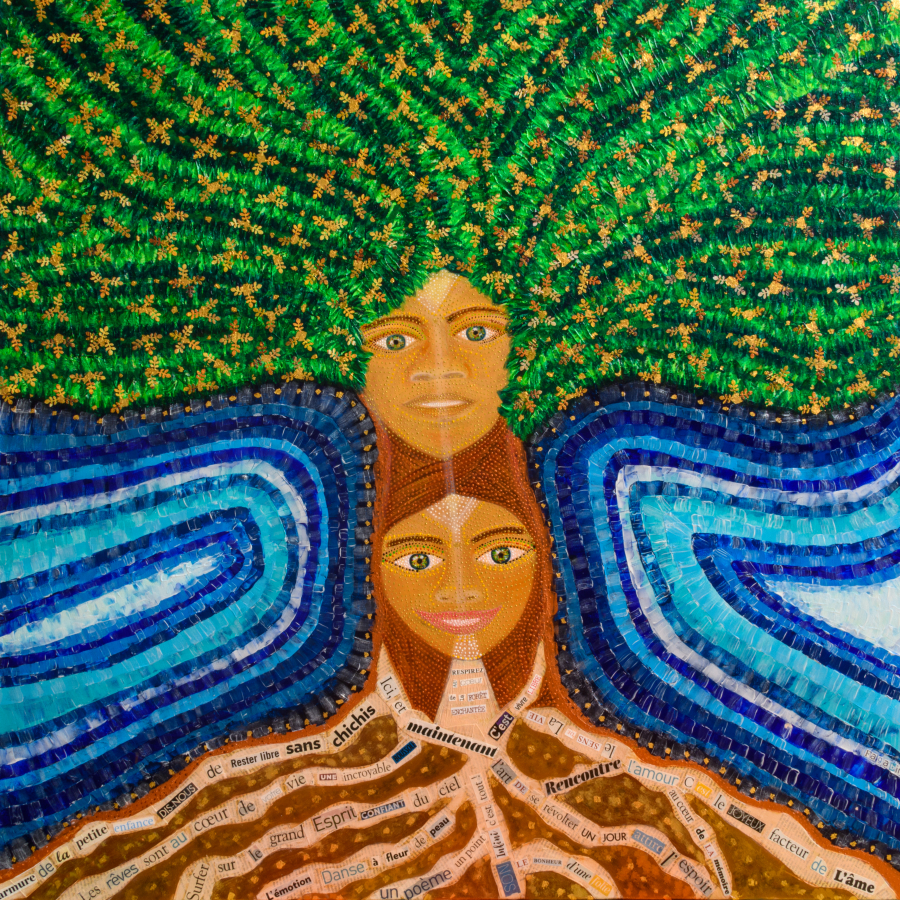 It represents the energy that circulates in every living being, like a breath essential to our survival.

It is the guardian of my dreams, of my internal resources.

He accompanies me to draw creative energies, and helps me to capture the light when my eyes are closed?

Rooting allows us to get through the storms, to make our projects grow, to develop them, to achieve our aspirations.

I have the feeling that with time goes, everything come back, even though it is running insolently under our noses.

Without safety nets, time is running at full speed, then sometimes it becomes interminable, every minute is relative.

Living in the present time/moment, being here and now, is not always easy in our twirling lives. It is a very tasty feeling to achieve this since we often have to relearn it, make efforts not to forget it, stop the flow of thoughts of our brain, and breathe!

Time is also the precious moments of the good old days as I often hear when I visit my grandparents. This time that seems to have stopped at the memories of another time becomes their present time.

The time when love appears to us and no longer leaves our lives, the time of self-confidence, the time to make, the time to savor the precious seconds, the time to dare, the time not to worry anymore with turpitudes that encumber us. Time to break free from norms without becoming rude fools.

“Memento mori” Remember that you will die, said the Romans, it is a matter of time…

When will my earthly time make its reverence to give way to other festivities?

While waiting to take our reverence, seize the day “carpe diem”, is perhaps the best adage to enjoy the time that passes?

” When the Spirit is wandering / says Wave  “

I was able to discover the practice of surfing thanks to my brother who generously initiated me, I take this opportunity to thank him.

The sea has always been part of my inspiration, it oxygenates my mind, brings me a form of freedom and intense sensations.